THIS IS AN AUTHENTICALLY AUTOGRAPHED PHOTO BY ANTHONY HOPKINS... THIS IS A 8 INCH BY 8 INCH COLOR LITHOGRAPH SIGNED BY ANTHONY HOPKINS MOUNTED ON PHOTOGRAPHY PAPER. CONDITION OF THE PHOTO AND AUTOGRAPH IS VERY GOOD. Sir Philip Anthony Hopkins, CBE (born 31 December 1937) is a Welsh film, stage and television actor. Considered by many to be one of film's greatest living actors,[1][2][3][4] he is best known for his portrayal of cannibalistic serial killer Hannibal Lecter in the 1991 blockbuster The Silence of the Lambs, its sequel, Hannibal, and its prequel, Red Dragon. His other notable film credits include The Elephant Man, Dracula, Legends of the Fall, The Remains of the Day, The Mask of Zorro, The World's Fastest Indian, Hearts in Atlantis, Nixon and Fracture. Hopkins was born and raised in Wales, and also became a U.S. citizen on 12 April 2000. He received a star on the Hollywood Walk of Fame in 2003 and was made a Fellow of the British Academy of Film and Television Arts in 2008. 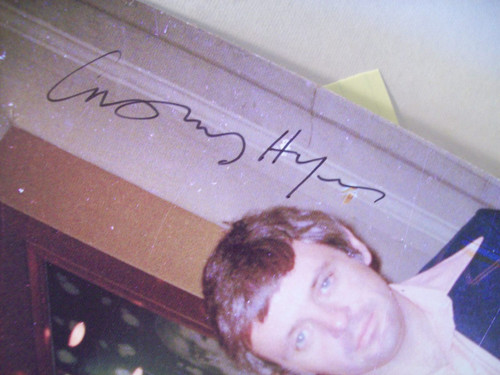