Life Magazine-August 14,1950-111 pages. This vintage Life magazine-which originally sold for twenty cents-features a full cover photo of Rear Admiral John Hoskins-"Uncle John Hoskins Naval Air Boss In Far East". The magazine also features a four page article with photos on Admiral John Hoskins and the Korean War-"Our Peg-Leg Admiral". John M. Hoskins was born in Pineville, Kentucky, on 22 October 1898. He graduated from the U.S. Naval Academy in 1921 and, following a period in surface ships, entered flight school in 1925. After earning his wings, Hoskins served in observation and scouting units, attaining squadron command in 1937. He was Air Officer and Executive Officer of USS Ranger (CV-4) during 1941-42. During 1943-44, he served in Washington, DC, and as Chief of Staff to Commander, Fleet Air, at Quonset Point, Rhode Island. Captain Hoskins was assigned as prospective commanding officer of USS Princeton (CVL-22) in September 1944 and was badly injured when that ship was bombed on 24 October 1944, during the Battle of Leyte Gulf. Despite the loss of his right foot, he continued on active duty, becoming commanding officer of the new USS Princeton (CV-37) in November 1945. Promoted to the rank of Rear Admiral, he became Commander, Carrier Division Seventeen in December 1946. After serving as Chief of Staff to Commander, Air Force, Pacific Fleet, he assumed command of Carrier Division Three in March 1950. When the Korean War broke out on 25 June 1950, Rear Admiral Hoskin's flagship, USS Valley Forge (CV-45) was the only U.S. carrier in the Western Pacific and launched the first U.S. Navy air strikes of the conflict. His Korean War carrier service was followed in early 1951 by command of the Pacific Division of the Military Air Transport Service. He became Commander, Fleet Air, Quonset Point, Rhode Island, in 1954. Rear Admiral Hoskins retired from active duty in July 1957 and was advanced to the rank of Vice Admiral at that time. He died in March 1964. The magazine has been autographed on the front cover by John Hoskins in blue fountain pen............BOTH MAGAZINE AND AUTOGRAPH ARE IN GOOD CONDITION.................... 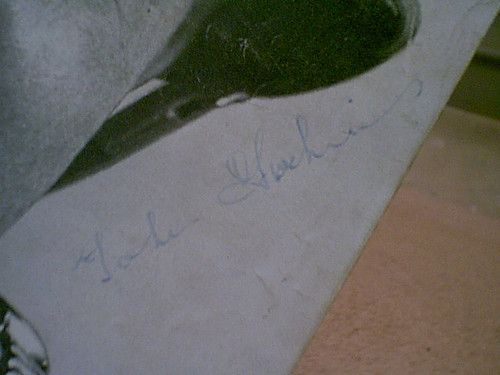