Abbie Hoffman-"Woodstock Nation"-1969-Vintage-5" X 8"-153 pages-Softcover Book-With Photos-Signed By Author.Abbot Howard "Abbie" Hoffman became the wild-and-wooly face of American youth activists protesting U.S. involvement in Vietnam at the end of the 1960s. A graduate of Brandeis University with a Master's degree in psychology from the University of California at Berkeley, Hoffman was a co-founder of New York's Youth International Party, a loosely-organized anti-war group more widely known as the "Yippies." Their 1967 anti-establishment pranks included dumping dollar bills (mostly fake) onto the floor of the New York Stock Exchange and surrounding the Pentagon in an attempt to levitate it. After a street fight with police during the 1968 Democratic National Convention in Chicago, Hoffman and his cohorts were arrested and charged with conspiracy to incite a riot. The trial was a media sensation, and the so-called Chicago Seven spent more than a year mocking the court of Judge Julius J. Hoffman with shenanigans that resulted in more than 150 contempt citations. In the end it all amounted to acquittals and convictions overturned, and Hoffman became known more as the guy who wrote Steal This Book (1971) or the guy who was arrested for wearing a shirt that looked like the American flag (1968). Hoffman was arrested in 1973 on drug charges, but he skipped bail and spent the next seven years on the lam, going by the name of Barry Freed. In the early 1980s he resurfaced and, after a little jail time, embarked on a career as an organizer, activist, author and lecturer. At the age of 52 he was found dead of what a Pennsylvania coroner called a "massive overdose" of phenobarbital. His books include Revolution for the Hell of It (1968), Woodstock Nation (1969), Soon to be a Major Motion Picture (1980) and Preserving Disorder: The Faking of the President (1988, with Jonathan Silvers).The book has been autographed on the title page by Abbie Hoffman.......BOTH BOOK AND AUTOGRAPH ARE IN VERY GOOD CONDITION. 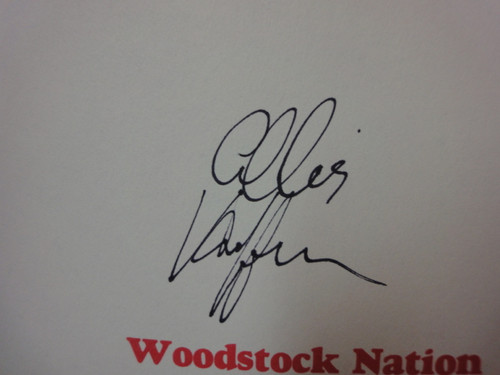