"Alfred Hitchcock Presents Ghost Stories For Young People"(Golden 89)-LP. Tracklist The Haunted And The Haunters (The Pirate's Curse) 10:22 The Magician ('Til Death Do Us Part) 3:55 Johnny Takes A Dare (The More The Merrier) 6:35 The Open Window (Special Adaptation) 7:48 The Helpful Hitchhiker 4:46 Jimmy Takes Vanishing Lessons Sir Alfred Joseph Hitchcock, KBE (13 August 1899  29 April 1980) was an English film director and producer, widely regarded as one of the most influential and extensively studied filmmakers in the history of cinema. Known as "the Master of Suspense", he directed over 50 feature films in a career spanning six decades, becoming as well known as any of his actors thanks to his many interviews, his cameo roles in most of his films, and his hosting and producing of the television anthology Alfred Hitchcock Presents (19551965). His films garnered a total of 46 Oscar nominations and six wins. The LP has been autographed on the front cover by Alfred Hitchcock.................CONDITION OF VINYL,COVER AND AUTOGRAPH IS VG. COVER HAS SOME WEAR. 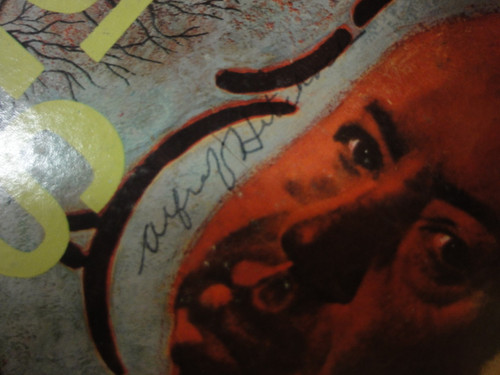