"The Best Plays Of 1980-1981" "The Burns Mantle Theatre Yearbook"-1981-Dodd Mead & Co-EDited By Otis Guernsey- 6" X 9"-563 pages-Illustrated With Photos And Drawings By Al Hirschfeld-Hardcover Book-With Jacket-With Photos & Illustrations-Signed By Al Hirschfeld...........Al Hirschfeld spent more than 75 years attending Broadway plays and sketching the stars for The New York Times and other publications. Full of wit and verve, Hirschfeld's distinctively bold, curvy line drawings caricatured stars from Groucho Marx and Ethel Merman through Barbra Streisand and beyond. His first newspaper sketches appeared in the 1920s, and he continued working until his death in 2003, working in a converted barber chair in his New York City studio. After the 1945 birth of his daughter Nina, Al Hirschfeld began hiding her name in his drawings, often tucked into hair or shirt folds. Finding the Ninas became a pastime with Hirschfeld's fans, and after a time he added a number to his signature to indicate how many Ninas each drawing contained. The book has been autographed on the title page by Al Hirschfeld with a fountain pen in blue.................BOTH BOOK AND AUTOGRAPH ARE IN VERY GOOD CONDITION. 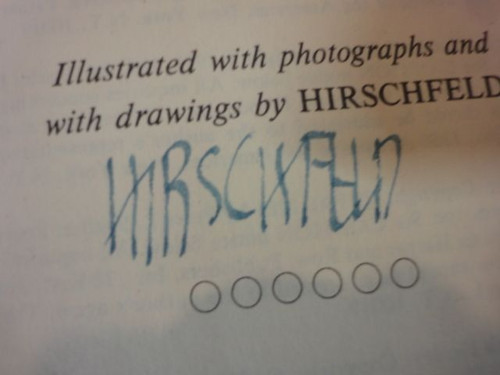