Thor Heyerdahl-"Kon-Tiki"-1951-Rand McNally-5 1/2" X 8"-304 pages-Hardcover Book-With Jacket-With Photographs-Signed By Author.Thor Heyerdahl [October 6, 1914  April 18, 2002) was a Norwegian adventurer and ethnographer with a background in zoology, botany, and geography. He became notable for his Kon-Tiki expedition in 1947, in which he sailed 8,000 km (5,000 mi) across the Pacific Ocean in a hand-built raft from South America to the Tuamotu Islands. The expedition was designed to demonstrate that ancient people could have made long sea voyages, creating contacts between separate cultures. This was linked to a diffusionist model of cultural development. Heyerdahl subsequently made other voyages designed to demonstrate the possibility of contact between widely separated ancient people, notably the Ra II expedition of 1970, when he sailed from the west coast of Africa to Barbados in a papyrus reed boat. He was appointed a government scholar in 1984.A hand signed cut signature by Thor Heyerdahl with a fountain pen in black has been affixed to the title page of the book.The cut signature portion is approximately 1" X 2 1/2"...........BOTH BOOK AND AUTOGRAPH ARE IN VERY GOOD CONDITION.JACKET HAS SOME WEAR. 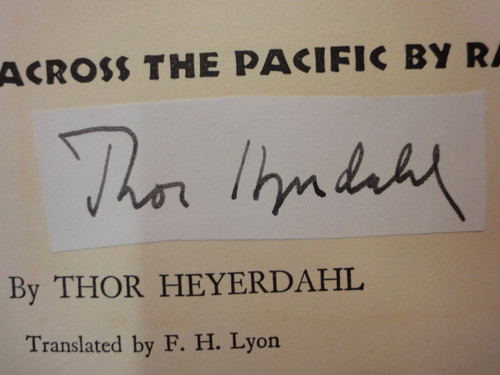