Chaim Herzog-"The War Of Atonement-October 1973-The Fateful Implications of the Arab-Israeli Conflict"-1975-Little Brown-6" X 9"-300 pages-hardcover book with jacket-with photos-First Edition-Signed By Author.Chaim Herzog born Vivian Herzog, September 17, 1918  April 17, 1997) served as the sixth President of Israel (19831993), following a distinguished career in both the British Army and the Israel Defense Forces. In 1975 he was appointed Israel's Ambassador to the United Nations, in which capacity he served until 1978. During his term the UN adopted the "Zionism is Racism" resolution (General Assembly Resolution 3379), which Herzog condemned and symbolically tore up (as his father had done to one of the British white papers regarding the British Mandate in Palestine), saying: "For us, the Jewish people, this resolution based on hatred, falsehood and arrogance, is devoid of any moral or legal value."In the 1981 elections Herzog entered politics for the first time, winning a seat in the Knesset as a member of the Alignment, the predecessor to the Labour Party.In 1983 he was elected the sixth President of Israel by the Knesset; he served two five-year terms (then the maximum permitted by Israeli basic law), retiring from political life in 1993. As president of Israel, Herzog made a number of visits abroad, being the first Israeli president to make an official visit to Germany, as well as visiting several far-east countries, Australia, and New Zealand. He was also noted for pardoning the Shin Bet agent involved in the Kav 300 affair. The book has been autographed on the title page by Chaim Herzog in black...............BOTH BOOK AND AUTOGRAPH ARE IN VERY GOOD CONDITION. JACKET HAS WEAR....................... 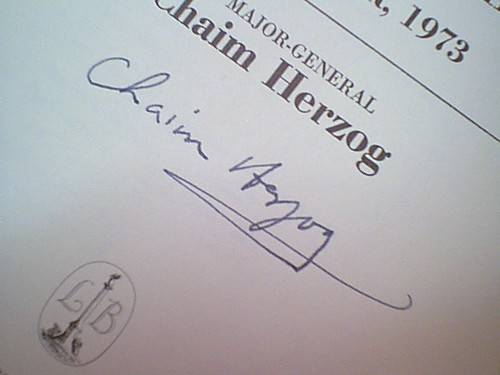