This item is an 8" X 10 1/2",black and white print of a charcoal sketch of actor Charlton Heston. The sketch is from 1961 and features Charlton Heston as he starred in the 1959 movie-"Ben-Hur".Ben-Hur is a 1959 American epic historical drama film set in ancient Rome, directed by William Wyler and starring Charlton Heston, Stephen Boyd, Jack Hawkins, Hugh Griffith and Haya Harareet. It won a record 11 Academy Awards, including Best Picture, an accomplishment that was not equalled until Titanic in 1997 and The Lord of the Rings: The Return of the King in 2003. A remake of the 1925 silent film with the same name, Ben Hur was adapted from Lew Wallace's 1880 novel Ben-Hur: A Tale of the Christ. The screenplay is credited to Karl Tunberg but includes contributions from Maxwell Anderson, S. N. Behrman, Gore Vidal, and Christopher Fry. The motion picture was the most expensive ever made at the time, and its sets were the largest yet built for a film. The picture contains a nine-minute chariot race which has become one of the most famous sequences in cinema. The score composed by Miklós Rózsa was highly influential on cinema for more than 15 years, and is the longest ever composed for a motion picture.The portrait print has been autographed on the front by Charlton Heston with a fountain pen in blue.........BOTH PORTRAIT PRINT AND AUTOGRAPH ARE IN VERY GOOD CONDITION. 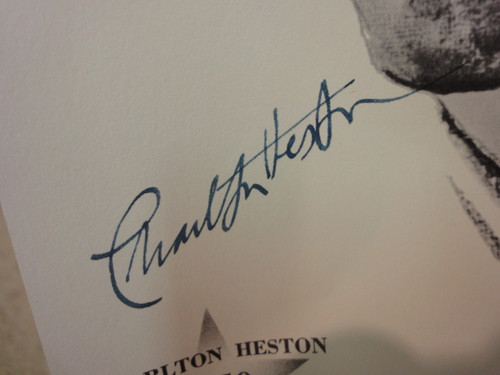