This item is a 7 1/2" X 12",black and white lithograph photo of actor Charlton Heston in a scene from one of his famous movies. The lithograph photo has beenmounted on a piece of 7 1/2" X 12" construction paper.In subsequent films, Charlton Heston began developing his persona of an unflinching hero with a piercing blue-eyed stare and unbending, self-righteous Middle American ethics. Heston's heroes could be violent and cruel, but only when absolutely necessary. He began a long stint of playing historical characters with his portrayal of Buffalo Bill in Pony Express and then Andrew Jackson in The President's Lady (both 1953). Heston's star burned at its brightest when DeMille cast him as the stern Moses in the lavish The Ten Commandments (1956). From there, Heston went on to headline numerous spectaculars which provided him the opportunity to play every one from John the Baptist to Michelangelo to El Cid to General "Chinese" Gordon. In 1959, Heston won an Academy Award for the title role in William Wyler's Ben Hur. By the mid-1960s, the reign of the epic film passed and Heston began appearing in westerns (Will Penny) and epic war dramas (Midway). He also did sci-fi films, the most famous of which were the campy satire Planet of the Apes (1968), its sequel Beneath the Planet of the Apes (1970) and the cult favorite Soylent Green (1973). The '70s brought Heston into a new kind of epic, the disaster film, and he appeared in three, notably Airport 1975. From the late '80s though the '90s, Heston has returned to television, appearing in series, miniseries and made-for TV movies. He also appeared in such films as Kenneth Branagh's Hamlet (1996) and 1998's Armageddon (in which he was spared extensive humiliation by only having to act as the film's narrator). The lithograph photo has been autographed on the front by Charlton Heston with a fountain pen in red......BOTH LITHOGRAPH PHOTO AND AUTOGRAPH ARE IN EXCELLENT CONDITION............... 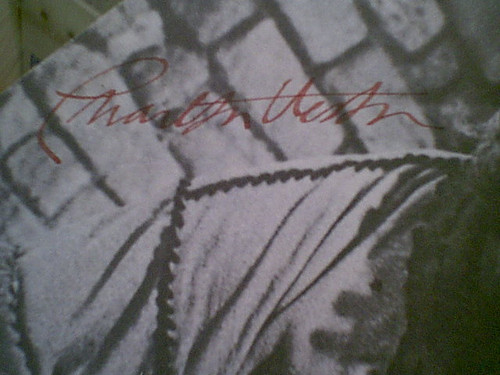