This item is a 7 1/2" X 11",black and white lithograph photo of actor Charlton Heston in a scene from the 1965 20th Century Fox Movie-"The Agony And The Ecsatsy". The lithograph photo has been mounted on a 7 1/2" X 11" piece of construction paper.pted by Philip Dunne from the novel by Irving Stone, The Agony and the Ecstacy is the story of the 16th century war of wills between Renaissance artist Michelangelo (Charlton Heston) and "warrior pope" Julius II (Rex Harrison). Commissioned to paint a religious fresco on the ceiling of the Sistine Chapel, the independent-minded Michelangelo balks at the assignment. He is virtually strongarmed into accepting the job by Pope Julius, who wants to leave something for future generations to remember him by. Director Carol Reed deftly juggles screen time between the Pope's activities on the battlefield and Michelangelo's slow, arduous completion of his monumental task. The film also gingerly approaches the subject of Michelangelo's sexual orientation vis-a-vis his relationship with the Contessina de Medici (Diane Cilento). Too long and limited in subject matter to score at the box office, The Agony and the Ecstacy holds up pretty well when seen today, especially when viewed in a wide-screen print. The lithograph photo has been autographed on the front by Charlton Heston with a fountain pen in red......BOTH LITHOGRAPH PHOTO AND AUTOGRAPH ARE IN EXCELLENT CONDITION..................................... 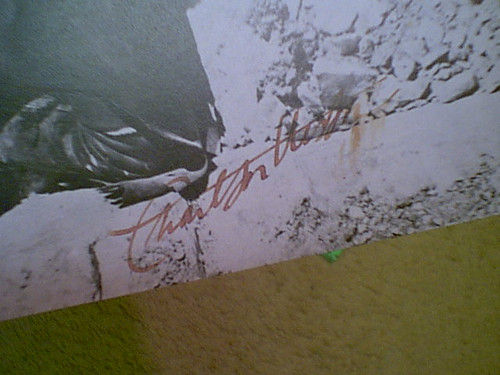