This item is an 8" X 10", color photo of actor Tom Hanks in a scene from the 2004 Movie-"The Ladykillers".The Ladykillers is a 2004 remake of the 1955 Ealing comedy of the same name. The remake was written, produced and directed by the Coen brothers and stars Tom Hanks, with a supporting cast that includes J. K. Simmons, Marlon Wayans, Tzi Ma, Ryan Hurst and Irma P. Hall.It is the first film in which Ethan and Joel Coen share both producing and directing credits; previously Ethan had always been credited as producer and Joel as director. The film was originally to be directed by Barry Sonnenfeld, the Coens' former cinematographer. They were commissioned to write the script. When Sonnenfeld backed out, the Coens were eventually hired as directors, with Sonnenfeld retaining a producer credit.The color photo has been autographed on the front by Tom Hanks.............BOTH PHOTO AND AUTOGRAPH ARE IN VERY GOOD CONDITION................... 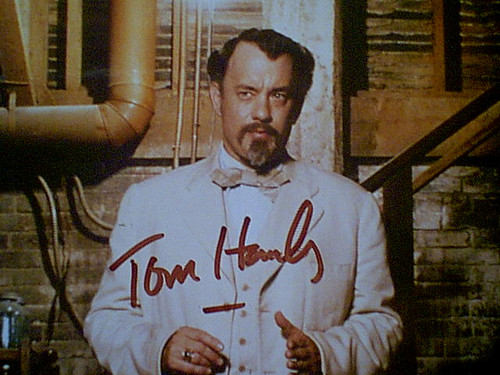