This item is an 8" X 10", black and white photo of Tom Hanks in a scene from the 1985 Movie-"Volunteers".Tom Hanks and John Candy were reunited for the first time since Splash in this period comedy about Peace Corps worker during the optimistic period of the Kennedy presidency. Lawrence Bourne III (Tom Hanks) is an upper-class heel who has to flee the country to escape his gambling debts and so sneaks aboard an airplane filled with Peace Corps volunteers en route to Thailand. On the plane he is befriended by well-meaning Peace Corps worker Tom Tuttle (John Candy). Once in Thailand, the workers become involved with building a bridge, and Lawrence becomes involved with the local Communists, an opium lord, and the CIA.The photo has been autographed on the front by Tom Hanks...............CONDITION OF PHOTO AND AUTOGRAPH IS EXCELLENT............ 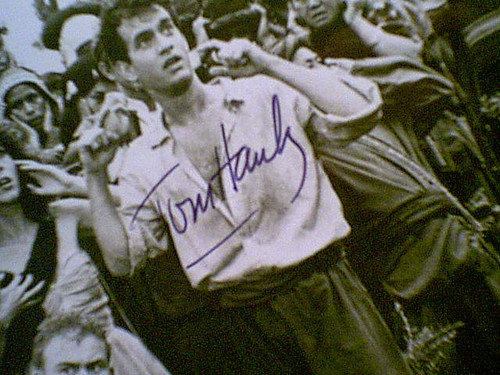