This item is an 8" X 10",black and white photo of actor Rutger Hauer in a movie scene.Rutger Oelsen Hauer born 23 January 1944) is a Dutch stage, television and film actor. His career began in 1969 with the title role in the popular Dutch television series Floris, directed by Paul Verhoeven. His film credits include Flesh + Blood, Blind Fury, Blade Runner, The Hitcher, Nighthawks, Wedlock, Sin City, Confessions of a Dangerous Mind, Ladyhawke, Buffy the Vampire Slayer, The Osterman Weekend, The Blood of Heroes, Batman Begins, Hobo with a Shotgun, The Rite and he won a Golden Globe Award for Best Supporting Actor for Escape from Sobibor. Hauer is a dedicated environmentalist and has founded an AIDS awareness organization, the Rutger Hauer Starfish Association.The photo has been autographed on the front by Rutger Hauer.......BOTH PHOTO AND AUTOGRAPH ARE IN VERY GOOD CONDITION. 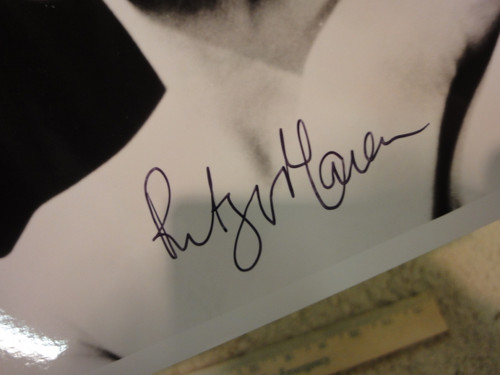