Russell Conwell-"Life And Public Services Of Governor Rutherford B. Hayes"-1976-B.B. Russell Pub-5" X 7"-328 pages-Hardcover Book-Illustrated-Signed By Rutherford B. Hayes. Rutherford Birchard Hayes (October 4, 1822  January 17, 1893) was an American politician and attorney who served as the 19th president of the United States from 1877 to 1881, after serving in the U.S. House of Representatives and as governor of Ohio. A lawyer and staunch abolitionist, he had defended refugee slaves in court proceedings during the antebellum years. He negotiated the political agreement to end federal support of Reconstruction........................ABOUT THE AUTHOR-Russell Herman Conwell (February 15, 1843  December 6, 1925) was an American Baptist minister, orator, philanthropist, lawyer, and writer. He is best remembered as the founder and first president of Temple University in Philadelphia, as the Pastor of The Baptist Temple, and for his inspirational lecture, "Acres of Diamonds". He was born in South Worthington, Massachusetts. The book has been signed on the title page by Rutherford B. Hayes with a fountain pen in black....................................BOTH BOOK AND AUTOGRAPH ARE IN GOOD CONDITION FOR THEIR AGE. FRONT AND BACK COVERS HAVE WEAR. 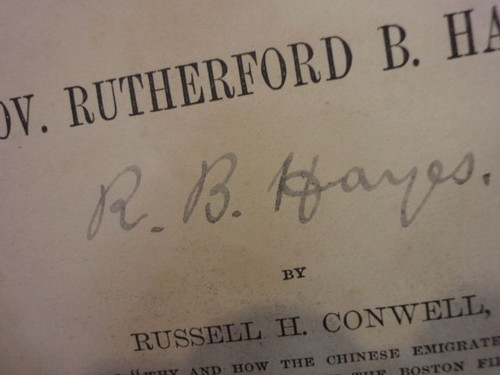