This item is a 5" X 7", early fan club photo of actor William S. Hart. William Surrey Hart (December 6, 1864 – June 23, 1946) was an American silent film actor, screenwriter, director and producer. He is remembered as a foremost Western star of the silent era who "imbued all of his characters with honor and integrity." During the late 1910s and early 1920s, he was one of the most consistently popular movie stars, frequently ranking high among male actors in popularity contests held by movie fan magazines....."Demanding realism in his [film] settings, Hart knew that it was not merely his physical presence, but the entire design of his films that audiences recognized. They knew a Bill Hart film from a Broncho Billy through the integration of landscape and action, the characteristic dilemmas of the protagonists and the gritty realism of the studio interiors. Hart was obsessed with all these details, and made sure they dominated the screen 100 per cent of the time.”—Film historian Richard Koszarski in Hollywood Directors: 1914-1940 (1976). The fan club photo has been autographed on the front by William S. Hart in white.................BOTH PHOTO AND AUTOGRAPH ARE IN VERY GOOD CONDITION. 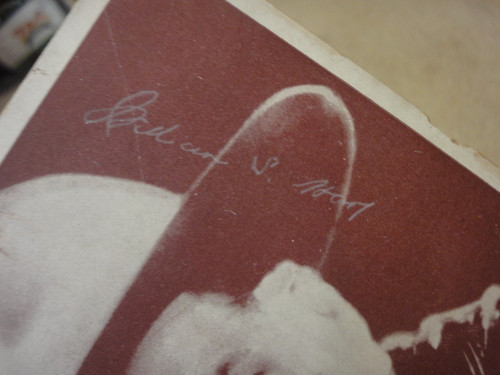