This is an authentically autographed LP by Larry Harmon... Larry Harmon's Bozo's Christmas Sing Along(Peter Pan 8123)Cover is signed by Larry 'Bozo' Harmon. Tracks:We wish you a merry christmas, Jingle bells, Deck the halls, Silent night, Story of the night before christmas, New year's mentioning intentionings. Condition of the vinyl,cover, and autograph is VERY GOOD. Harmon was born in Toledo, Ohio and raised in Cleveland. During World War II, he served in the Army. Upon returning he attended the University of Southern California where he majored in theater and performed in the Spirit of Troy marching band.[1] Harmon was married four times and had four children..[2] In 1956, Harmon purchased the licensing rights to the Bozo character from Capitol Records. Harmon marketed the Bozo property aggressively. By the late 1960s, Harmon had licensed local Bozo TV shows in nearly every major U.S. market, and across the world in places as far away as Thailand, Greece and Brazil.[3] Harmon also produced a series of Bozo animated cartoons intended to be shown with the live-action show. Harmon's animation studio also produced eighteen Popeye cartoons in 1960 as part of a larger TV syndication package. On New Year's Day 1996, Harmon dressed as Bozo for the first time in 10 years, appearing in the Rose Parade in Pasadena, California to a deafening reaction from a thrilled crowd.[4] On July 3, 2008 Harmon died in his home of congestive heart failure in Los Angeles, California.[5] He is buried in Mount Sinai Memorial Park Cemetery. 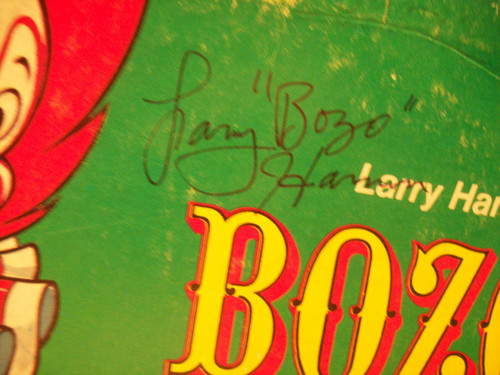