This item is an 8" X 10",black and white photo of actor Laurence Harvey in a scene from the 1970 Movie-"WUSA".Paul Newman served as co-producer of this allegorical drama and stars as Rheinhardt, a opportunistic drifter who ends up in New Orleans and hits up his old friend Farley (Laurence Harvey), a con man-turned-phony preacher, for a job. Farley is able to get Rheinhardt hired on as an announcer at a local radio station, WUSA, but the station is a right-wing propaganda mill that devotes its air time to venomous tirades against political and social progress. Rheinhardt is happy to be making decent money, and he makes the friendly acquaintance of a local working girl, Geraldine (Joanne Woodward), so he refuses to look his gift horse in the mouth. However, when he finds out that WUSA is actually involved in shadowy political actions, he is at a loss for what to do, especially after a naïve and troubled social worker (Anthony Perkins) is tricked into starting a race riot. Robert Stone wrote the screenplay, adapted from his novel A Hall of Mirrors. The photo has been autographed on the front by Laurence Harvey........BOTH PHOTO AND AUTOGRAPH ARE IN EXCELLENT CONDITION................ 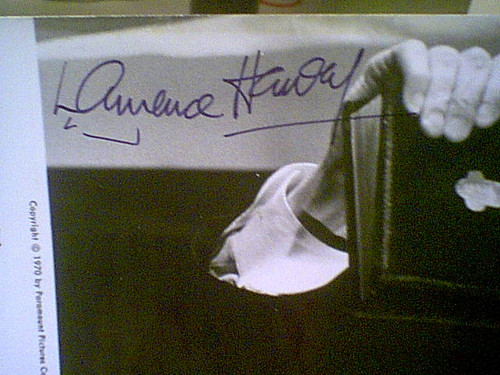