"Jon Hall Brings Music From Hawaii"(Mercury Wing 12141)-LP.This vintage LP was released in the 1950's and features actor Jon Hall on the front and back covers.Athletic leading man Jon Hall felt safe when, late in his career, he played fast and loose with the facts concerning his early life  including his actual date of birth. That's because until 1937, there was no Jon Hall, at least not officially. When he began his film career, he was billed as Charles Locher (notably in 1935's Charlie Chan in Shanghai) then went by the named of Lloyd Crane. With his starring role as a persecuted native boy in John Ford's The Hurricane (1937), the actor became Jon Hall for keeps. During the 1940s, Hall co-starred with the exotic Maria Montez in a series of nonsensical but very popular Technicolor costume pictures at Universal, bearing such titles as Arabian Nights (1942) and White Savage (1943). With his beefcake physique beefing up where it shouldn't by the early 1950s, Hall turned to television, where he starred in the well-circulated syndicated series Ramar of the Jungle from 1952 through 1954. He then left acting cold for several years to become an accomplished manufacturer of photographic equipment, making an excellent living renting out his underwater cameras to various Hollywood producers. He returned to films as the star and director of The Beach Girls and the Monster (1965), which not surprisingly was more entertaining in its underwater scenes than when it bobbed to the surface. He also kept busy as owner-manager of a small flying school. Hall was married four times; his second wife was singer Frances Langford, and his third and fourth was actress Raquel Torres. In 1979, suffering from terminal bladder cancer and not wishing to be a further burden on his relatives, Jon Hall shot himself in his sister's North Hollywood home.The LP has been autographed on the front cover by Jon Hall with a fountain pen in black...................CONDITION OF VINYL IS WEAK VG.CONDITION OF COVER AND AUTOGRAPH IS VG...... 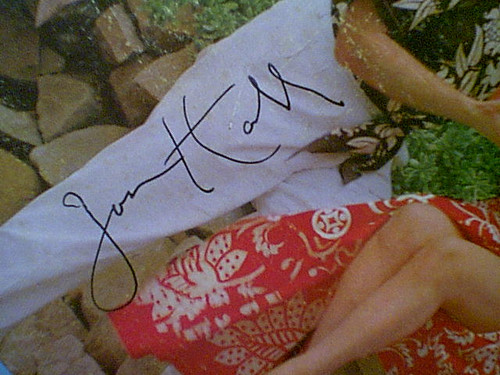