"Thanks For Everything:-1938-J. Albertson-sheet music-import from England.Thanks for Everything is an unjustly forgotten lampoon of media promotional stunts. Jack Haley wins a contest sponsored by an ad agency, which is looking for the perfect "average American." The contest's avaricious promoters (Adolphe Menjou and Jack Oakie) use poor Haley as a merchandising tool by having him endorse all sorts of products. When Haley's girl friend (Arleen Whelan) realizes that the hapless fellow is being exploited as a means of controlling the advertising industry, Haley insists that the promoters cease and desist or he'll blow the whistle. The promoters respond by discrediting Haley as a crackpot, but justice triumphs in the end. Thanks for Everything is capped by a bizarre sequence in which Menjou and Oakie convince Haley that World War II has broken out--a sequence filmed one year before this actually occurred! The sheet music has been autographed on the front cover by Jack Haley with a fountain pen in blue,Jack Oakie with a fountain pen in brown and Binnie Barnes with a fountain pen in black..........BOTH SHEET MUSIC AND AUTOGRAPHS ARE IN AVERAGE CONDITION..................... 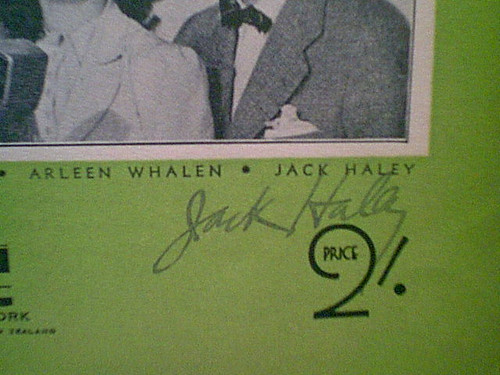