"What Is This Power?'-1935-Francis Day & Hunter-10" X 12"-England-sheet music. This vintage sheet music is an import from England as price of sheet music is listed on the front cover in British currency. The song is featured in the 1935 Columbia Movie-"The Girlfrieind". The movie stars Jack Haley and Ann Sothern and they are featured on the front cover in an original scene.Ann Sothern and Jack Haley star in this inconsequential little musical. Haley is a struggling playwright of minimal talent, whose latest play is miraculously selected for a Broadway berth by producer Roger Pryor. The problem: Pryor isn't a producer at all, but an out-of-work actor anxious to get into anyone's play, even Haley's. After several ups and downs, the play actually makes it to Broadway, where it is regarded as the ultimate in ridiculous comedy and becomes a success! It would be stretching things to suggest that this was the inspiration for Mel Brooks' similarly plotted The Producers, since the backstage legend of a flop play becoming an accidental hit is as old as the Theatre itself. The sheet music has been autographed on the front cover by Jack Haley with a fountain pen in red and Ann Sothern with a fountain pen in black...........BOTH SHEET MUSICS AND AUTOGRAPHS ARE IN VERY GOOD CONDITION. PLEASE NOTE THAT THE JACK HALEY SIGNATURE IS DARKER AND MORE CLEAR THAN IT APPEARS IN THE PHOTO. THE SHEET MUSIC HAS A HORIZONTAL CREASE.................... 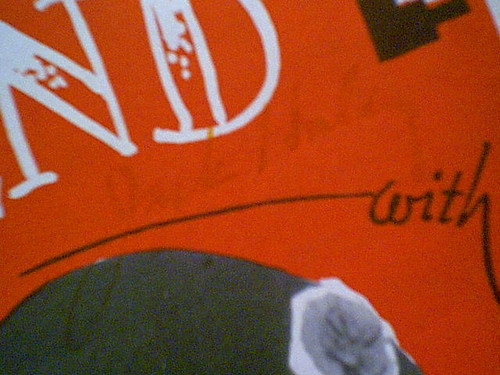