This item is an 8" X 10",early publicity photo from MGM of actor George Hamilton.Movie-star handsome, Hamilton played the lead in his very first film, Crime and Punishment USA (1959). While his acting talent was barely discernible in his earliest effort, Hamilton steadily improved in such MGM films as Home From the Hill (1960), Where the Boys Are (1960), Light in the Piazza (1961). He was at his best in a brace of biopics: in Warner Bros.' Act One (1963) he played aspiring playwright Moss Hart, while in Your Cheatin' Heart (1965), he registered well as self-destructive C&W singer Hank Williams. His much-publicized mid-1960s dating of President Johnson's daughter Lynda Bird was unfairly written off by some as mere opportunism, a calculated ploy to buoy up a flagging career. In fact, it did more harm than good to Hamilton: by 1969, movie roles had dried up, and he was compelled to accept his first TV-series role, playing jet-setter Duncan Carlyle in The Survivors. The following year, he starred as State Department functionary Jack Brennan in the weekly TV espionager Paris 7000. He staged a spectacular comeback as star and executive producer of Love at First Bite (1979), a screamingly funny "Dracula" take-off that won the actor a Golden Globe nomination. Even better was Zorro the Gay Blade (1980), which unfortunately failed to match the excellent box-office performance of First Bite but which still provided a much-needed shot in the arm to Hamilton's career. He went on to play such campish roles as villainous movie producer Joel Abrigor in TV's Dynasty (1985-86 season only) and jaded 007-type Ian Stone in the weekly Spies (1987). Throughout the thick and thin of his acting career, Hamilton remained highly visible on the international social scene, squiring such high-profile lovelies as Elizabeth Taylor and Imelda Marcos. He also remained financially solvent with his line of skin products and tanning salons. In 1995, George Hamilton hopped on the talk-show bandwagon, co-starring with his former wife Alana (who'd remarried rocker Rod Stewart) on a not-bad syndicated daily TV chatfest.The photo has been autographed on the front by George Hamilton.............BOTH PHOTO AND AUTOGRAPH ARE IN USED CONDITION.PHOTO HAS CREASES........... 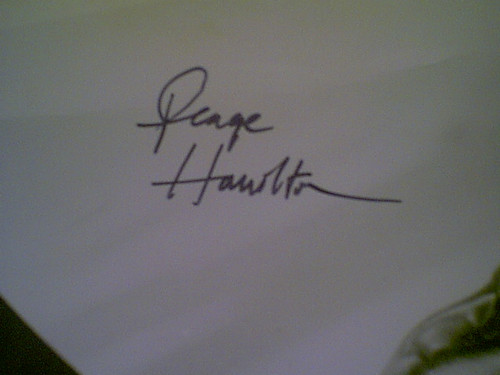