This item is an 8" X 10",black and white photo of the cast of "Happy Days".Happy Days is an American television sitcom that originally aired from January 15, 1974, to September 24, 1984, on ABC. Created by Garry Marshall, the series presents an idealized vision of life in the mid-1950s to mid-1960s United States.et in the Midwestern city of Milwaukee, Wisconsin, the series revolves around teenager Richie Cunningham (Ron Howard) and his family: his father, Howard (Tom Bosley), who owns a hardware store; traditional homemaker and mother, Marion (Marion Ross); younger sister Joanie (Erin Moran); and high school dropout, biker and suave ladies' man Arthur "Fonzie"/"The Fonz" Fonzarelli (Henry Winkler), who would eventually become the Cunninghams' upstairs tenant. The earlier episodes revolve around Richie and his friends, Warren "Potsie" Weber (Anson Williams) and Ralph Malph (Donny Most), with Fonzie as a secondary character. As the series progressed, Fonzie proved to be a favorite with viewers and soon more story lines were written to reflect his growing popularity. Fonzie befriended Richie and the Cunningham family, and when Richie left the series for military service, Fonzie became the central figure of the show. In later seasons, other characters were introduced including Fonzie's young cousin, Charles "Chachi" Arcola (Scott Baio), who became a love interest for Joanie Cunningham.The photo has been autographed on the front by Ron Howard,Henry Winkler and Anson Williams.................BOTH PHOTO AND AUTOGRAPHS ARE IN VERY GOOD CONDITION. 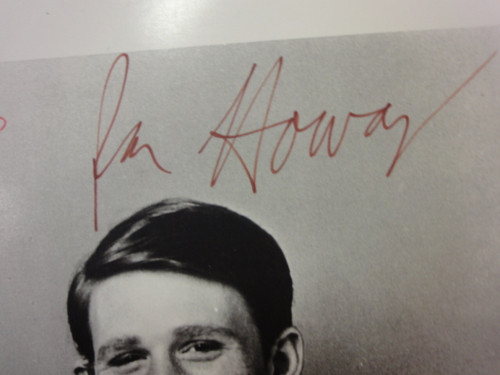