This item is a 2 1/2" X 5 1/2" piece of a page from a title page of a book signed by Dag Hammarskjold.Hammarskjöld, Dag (190561, Swedish statesman, secretary-general of the United Nations (195361). He attended the universities of Uppsala and Stockholm (Ph.D., 1934). The son of a former prime minister of Sweden, Hjalmar Hammarskjöld, he entered government service in 1930. He was chairman of the board of the Bank of Sweden (194148), performed many diplomatic missions, and entered (1951) the Swedish cabinet as deputy foreign minister. Hammarskjöld served (195153) in the Swedish delegation to the United Nations and in 1953 was elected to succeed Trygve Lie as secretary-general. He was reelected in 1957.During his tenure Hammarskjöld greatly extended the influence of the United Nations as well as the prestige of the secretary-general. A quiet, tactful, and highly active diplomat, he personally led missions to Beijing (1955), the Middle East (1956, 1958), and elsewhere to lessen tensions or to arrange peace settlements. Under his guidance a UN emergency force was established to help maintain order in the Middle East after the 1956 Suez crisis, and UN observation forces were sent to Laos and Lebanon. He initiated and directed (196061) the United Nation's vigorous role in Congo (Kinshasa) against the strong opposition of the Soviet Union. He was on a mission to the Congo when his plane crashed in Northern Rhodesia (now Zambia) on Sept. 18, 1961. He was succeeded as secretary-general by U Thant. Hammarskjöld was posthumously awarded the 1961 Nobel Peace Prize.The paper has been autographed on the front by Dag Hammarskjold with a fountain pen in black..........BOTH PAPER AND AUTOGRAPH ARE IN VERY GOOD CONDITION. 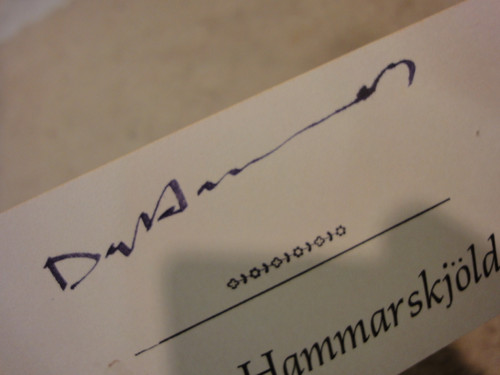