This is an authentically autographed Playbill by Cedric Hardwicke and Gertrude Berg.. Playbill-1959-A Majority of One-Photo cover is signed by Cedric Hardwicke and Gertrude Berg, condition of the magazine and autographs is VERY GOOD The comedy involves Mrs. Jacoby, a Jewish widow from Brooklyn, New York, and Koichi Asano, a millionaire widower from Tokyo. Mrs. Jacoby is sailing to Japan with her daughter and foreign service officer son-in-law who is being posted to the U.S. Embassy in Tokyo. She still considers the country the enemy responsible for the death of her son during World War II, but her feelings change when she meets Mr. Asano on board the ship. When she advises her family of Mr. Asano's desire to court her, Mrs. Jacoby's daughter objects to the possibility of an interracial marriage. The 1959-60 Broadway production was directed by Dore Schary and ran for 3 previews and 556 performances, with Gertrude Berg, Cedric Hardwicke, and Ina Balin. 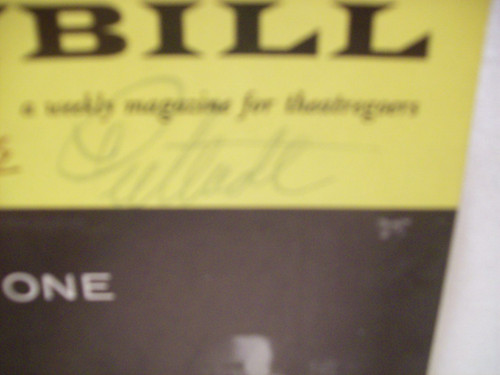