Trouser Press Magazine-Nov/Dec 1975-47 pages. This vintage magazine-which originally sold for $1.00-features a cover photo of Alex Harvey plus an article with photos.Alex Harvey (5 February 1935 – 4 February 1982) was a Scottish rock and roll recording artist. With his Sensational Alex Harvey Band, he built a reputation as a live performer during the 1970s glam rock era. The band was renowned for its eclecticism and energetic live performance, Harvey for his charismatic persona and daredevil stage antics.In 1972, Harvey formed the Sensational Alex Harvey Band with guitarist Zal Cleminson, bassist Chris Glen, and cousins Ted and Hugh McKenna on drums and keyboards respectively, all previous members of progressive rock act "Tear Gas". The Sensational Alex Harvey Band (often shortened to SAHB) produced a succession of highly regarded albums and tours throughout the 1970s.The band had hits in Britain with the single "Delilah", a re-make of the Tom Jones hit, which reached No 7 in 1975, and also with "The Boston Tea Party" (June 1976). After Harvey left the group later that year, the other members continued as 'SAHB… without Alex'.Harvey was also instrumental in the formation of Stone the Crows, by introducing his younger brother Leslie Harvey to singer Maggie Bell.The magazine has been autographed on the front cover by Alex Harvey....................BOTH MAGAZINE AND AUTOGRAPH ARE IN VERY GOOD CONDITION. 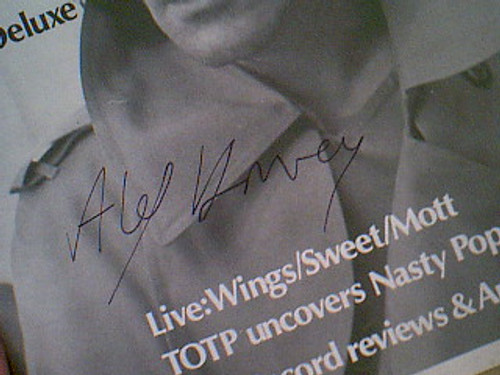