Wooody Guthrie-"Born To Win"-1965-Macmillan Co-6" X 9"-247 pages-Hardcover
Book With Illustrations-Signed By Author..................Woodrow Wilson Guthrie (July 14, 1912 – October 3, 1967) was an American singer-songwriter, and one of the most significant figures in early American folk music. His work focused on themes of American socialism and anti-fascism. His music includes songs such as "This Land Is Your Land", written to oppose the American exceptionalist song "God Bless America", and has inspired several generations both politically and musically. Guthrie wrote hundreds of country, folk, and children's songs, along with ballads and improvised works. His album of songs about the Dust Bowl period, Dust Bowl Ballads, was included on Mojo magazine's list of 100 Records That Changed The World, and many of his recorded songs are archived in the Library of Congress. Songwriters such as Bob Dylan, Phil Ochs, Johnny Cash, Bruce Springsteen, Robert Hunter, Harry Chapin, John Mellencamp, Pete Seeger, Andy Irvine, Joe Strummer, Billy Bragg, Jerry Garcia, Bob Weir, Jeff Tweedy, Tom Paxton, Brian Fallon, and Sixto Rodríguez have acknowledged Guthrie as a major influence on their work. He frequently performed with the slogan "This machine kills fascists" displayed on his guitar. The book has been autographed on the title page by Woody Guthrie. Please note this book was signed by Woody Guthrie when he was diagnosed with Huntington's Disease so there are tremors in the signature..............................BOTH BOOK AND AUTOGRAPH ARE IN VERY GOOD CONDITION. 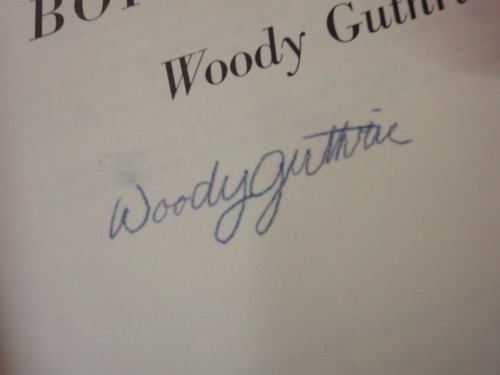