Greene, Shecky "A Funny Thing Happened To Me On My Way To The Moon" 1950'S LP Signed Autograph

SKU:
grshafuthhat
Headline:
Shecky Greene "A Funny Thing Happened To Me On My Way To The Moon" 1950's LP Signed Autograph

Shecky Greene(Majestic 1010)-"A Funny Thing Happened To Me On The Way To The Moon"-LP. This vintage LP was released in 1950's on the Majestic label. It features the "on-beat" comedy of Shecky Greene.Tracks include-Hollywood Where The Stars Are Made,The Ed Sullivan Ingomat Johnannsen Interview,Parenthood Anonymous,Danny Thomas At The "500",Washroom Woes,The Expose,Dean Martin,One People,Las Vegas-Nude For Thought,Richard Wagner and Franz Lizst.Veteran nightclub comedian Shecky Greene is more of a storyteller than a dispenser of one-liners, and this fact might be the secret behind his durability. Greene started out in his home turf of Chicago in 1947; within six years, he was headlining in Las Vegas and making the first of thousands of TV appearances. Not entirely comfortable playing anyone other than "himself," he has nonetheless essayed character parts in such films as Tony Rome (1968), The Love Machine (1970), History of the World Part One (1981), and Splash (1984, as Mr. Buyrite). He also played wisecracking Private Braddock on the first (1962-63) season of the TV war drama Combat. Shecky Greene has been the recipient of many honors and industry awards for his stand-up work.The LP has been autographed on the front cover by Shecky Greene..............CONDITION OF VINYL,COVER AND AUTOGRAPH IS VG.......... 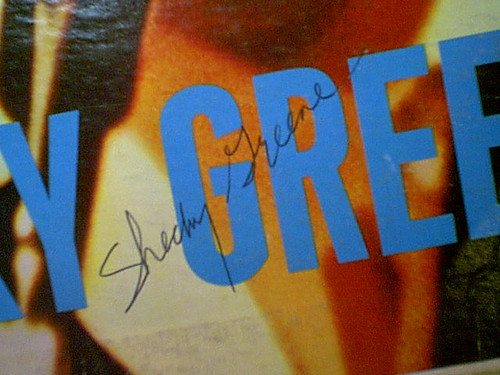 Greene, Shecky "A Funny Thing Happened To Me On My Way To The Moon" 1950'S LP Signed Autograph