THIS IS AN AUTHENTICALLY AUTOGRAPHED PHOTO BY PETER GRAVES.. THIS IS A 7 INCH BY 10 INCH BLACK AND WHITE PHOTO SIGNED BY PETER GRAVES FROM THE TV SERIES "FURY". Fury was an American western television program on NBC from 1955 to 1960, starring Peter Graves as Jim (who operated the Broken Wheel Ranch in California), Bobby Diamond as Jim's son Joey and William Fawcett as ranch hand Pete. The series continued in reruns on NBC until 1966 and was sydnicated throughout the 1960s and 70s by ITC Entertainment who also produced the series. It was the first American series produced by the British-based company. [edit] Trivia The alternate title "Brave Stallion" was used in earlier syndication while the original title ran its duration on NBC. The frequent introduction to the show depicted the beloved stallion running inside the corral and approaching the camera as the announer reads: "FURY!..The story of a horse..and a boy who loves him." A typical plot involved a guest star who got into mischief, was rebellious or disorderly and got into trouble because of it, and subsequently was rescued by Fury. In most shows, Fury would only let Joey ride him, unless the other individual did something for Fury like fix a damaged hoof. Also, Jim won every fist-fight he was in. The music for the show was inspiring and endearing. It was also exciting, especially when Fury, or Jim on some shows, came to the rescue. Bobby Diamond, the actor who played Joey, never really got another starring role, either on TV or in the movies. Peter Graves, on the other hand starred later in "Mission Impossible" and he played one of the pilots in the movie "Airplane." He also did some TV commercials. The horse's actual name was Highland Dale who starred in "Giant" and "Wild Is The Wind" among several other major motion pictures from 1946 to 1957. Episodes of the television series is credited among a list of television series for being included in past public film showings at the annual Mid atlantic nostalgia convention in Aberdeen, Maryland. The creators of Fury would also create Thunder, another television show featuring a stallion. [1] This show ran on Saturday mornings during the 1977-78 season. CONDITION OF THE PHOTO AND AUTOGRAPH IS VERY GOOD. 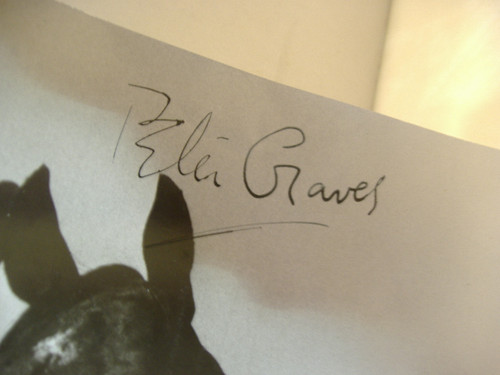