THIS IS AN AUTHENTICALLY AUTOGRAPHED LP BY LORNE GREENE... WELCOME TO THE PONDEROSA-AN EVENING OF SONGS AND STORIES WITH LORNE GREENE(RCA LPM 2843)RELEASED IN 1964. PHOTO COVER IS SIGNED BY LORNE GREENE. CONDITION OF THE VINYL IS WEAK VG, COVER AND AUTOGRAPH IS VERY GOOD. Lorne Greene was the stage name of Lyon Chaim Green O.C., LL.D. (February 12, 1915  September 11, 1987), a Canadian actor. He is best known for his role as "Ben Cartwright" on the long-running western Bonanza. He is also known for the shorter-lived original incarnation of the science fiction franchise of Battlestar Galactica and the award-winning Canadian Canadian television nature documentary series "Lorne Greene's New Wilderness", and many other roles spanning his long career. 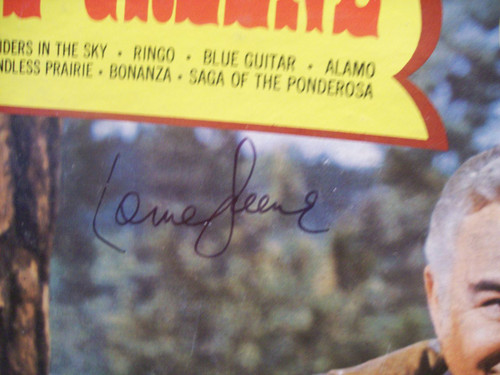