THIS IS AN AUTHENTICALLY AUTOGRAPHED SHEET MUSIC BY KATHRYN GRAYSON... SONG OF THE VAGABONDS-WORDS BY BRIAN HOOKER-MUSIC BY RUDOLF FRIML-"THE VAGABOND KING" STARRING KATHRYN GRAYSON, ORESTE RITA MORENO, SIR CEDRIC HARDWICKE, AND WALTER HAMPDEN-RELEASED IN 1956-PHOTO COVER IS SIGNED BY KATHRYN GRAYSON. In 1461, French nobles fearing King Louis XI may seize their lands, join forces with the rebellious Duke of Burgundy to overthrow the king. One of the Duke's captains suggests enlisting the aid of Francois Villon who is known to oppose the king and is leader of the Vagabonds, a group that robs the rich to aid the poor. In league with Burgundy, Villon and two of his cohorts enter Paris, but are captured by the king's men. The king, recognizing Villon's power over the people, proposes that Villon defend Paris against Burgundy and help uncover traitors in the court. CONDITION OF THE SHEET MUSIC AND AUTOGRAPH IS VERY GOOD. 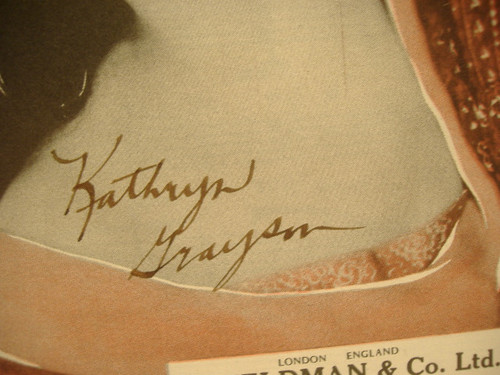