THIS IS AN AUTHENTICALLY AUTOGRAPHED PLAYBILL BY JOEL GREY.. THIS IS A 5 1/2 INCH BY 9 INCH PLAYBILL FROM THE PALACE THEATRE-1974-GOODTIME CHARLEY-PHOTO COVER IS SIGNED BY JOEL GREY-CONDITION OF THE PLAYBILL AND AUTOGRAPH IS VERY GOOD. Goodtime Charley is a musical with a book by Sidney Michaels, music by Larry Grossman, and lyrics by Hal Hackady. A humorous take on actual historical events, it focuses on the Dauphin of France, who evolves from a hedonistic young man enamored of women in general (and Joan of Arc in particular) into a regal king while Joan follows her voices to her tragic fate. The show underwent extensive changes throughout its development stage, especially when Joel Grey expressed interest in playing the lead. The script and score were rewritten significantly in order to tailor the piece to his personality and talents. The producers were so keen on casting Ann Reinking as Joan they put everything on hold while she recovered from a back injury she had sustained while performing in Over Here!. The delay would prove to be damaging, since Grey had been signed for the film Buffalo Bill and the Indians and had limited time to commit to the stage project. The out-of-town run in Boston resulted in major cuts in order to trim the running time from three-and-a-half hours to a more reasonable ninety minutes before the show continued to Philadelphia and New York City. After twelve previews, the Broadway production, directed by Peter H. Hunt and choreographed by Onna White, opened on March 3, 1975 at the Palace Theatre, where it ran for only 104 performances, closing abruptly when the producers were unable to find a name star to replace the departing Grey. In addition to Grey and Reinking, the cast included Susan Browning, Richard B. Shull, Louis Zorich, and Grace Keagy. 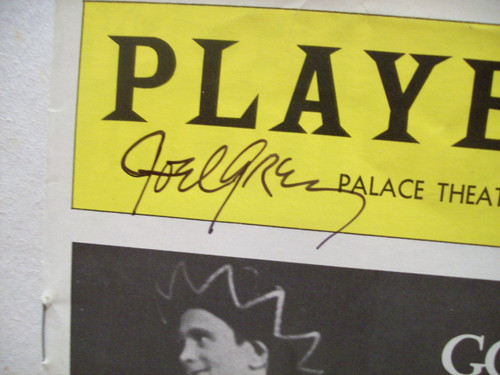