This item is an 8" X 10", black and white photo of Cary Grant. Cary Grant was a leading Hollywood box-office star for three decades, and remains the silver screen's definition of the quick-witted and debonair gent. Cary Grant was born as Archibald Alexander Leach in England. He quit school at age 14 and toured England with an acrobatic vaudeville troupe; when their show went to Broadway as Good Times in 1920, Grant went along and then stayed in America. By 1932 he was making movies as a handsome and lanky supporting player. As a leading man he was cast early on as a frantic goofball in comedies like Bringing Up Baby (1938, with Katharine Hepburn) but in later years he evolved into a suave and sophisticated leading man. Cary Grant made films from 1932 until retiring in 1966, and in those three decades he co-starred with just about every leading lady in the business, from Hepburn and Marilyn Monroe to Grace Kelly and Sophia Loren. His early films included the Howard Hawks comedies Bringing Up Baby and His Girl Friday (1940), and he had remarkable success as a leading man for Alfred Hitchcock in Suspicion (1941), Notorious (1946), and To Catch a Thief (1955). North by Northwest (1959), also with Hitchcock, included what may be Grant's most famous film moment: the dapper star being chased and strafed across dusty farmland by a malicious cropduster. Cary Grant was twice nominated for Oscars as best actor (for the 1941 film Penny Seranade and the 1944 film None But the Lonely Heart) but won neither time. He was given an honorary Oscar in 1970 "for his unique mastery of the art of screen acting." The photo has been autographed by Cary Grant.........................BOTH PHOTO AND AUTOGRAPH ARE IN EXCELLENT CONDITION. 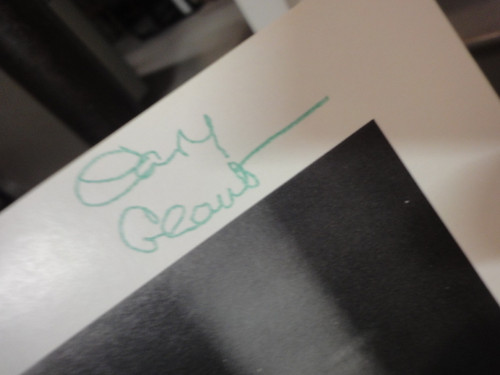