Griffith, Andy "Just For Laughs" 1958 LP Signed Autograph "What It Was Was Football"

Andy Griffith(Capitol 962)-"Just For Laughs"-LP. Tracklist A1 What It Was, Was Football A2 Silhouettes A3 Carmen A4 No Time For Sergeants B1 Romeo & Juliet B2 Make Yourself Comfortable B3 Swan Lake B4 Conversation With A Mule Andy Samuel Griffith (June 1, 1926  July 3, 2012) was an American actor, television producer, Grammy Award-winning Southern-gospel singer, and writer. He was a Tony Award nominee for two roles, and gained prominence in the starring role in director Elia Kazan's film A Face in the Crowd (1957) before he became better known for his television roles, playing the lead characters in the 19601968 situation comedy The Andy Griffith Show and in the 19861995 legal drama Matlock.The LP has been autographed on the front cover by Andy Griffith..........CONDITION OF VINYL,COVER AND AUTOGRAPH IS WEAK VG. 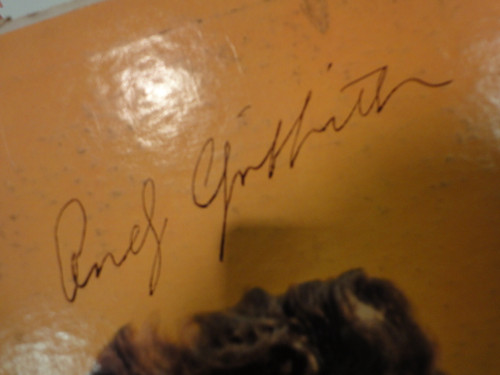 Griffith, Andy "Just For Laughs" 1958 LP Signed Autograph "What It Was Was Football"