Anna Mary Robertson Moses (September 7, 1860 – December 13, 1961), or Grandma Moses, was an American folk artist. She began painting in earnest at the age of 78 and is a prominent example of a newly successful art career at an advanced age. Her works have been shown and sold worldwide, including in museums, and have been merchandised such as on greeting cards. Sugaring Off was sold for US$1.2 million in 2006. Moses appeared on magazine covers, television, and in a biographical documentary. Her autobiography is My Life's History, she won numerous awards, and she held two honorary doctoral degrees. The New York Times said: "The simple realism, nostalgic atmosphere and luminous color with which Grandma Moses portrayed simple farm life and rural countryside won her a wide following. She was able to capture the excitement of winter's first snow, Thanksgiving preparations and the new, young green of oncoming spring... In person, Grandma Moses charmed wherever she went. A tiny, lively woman with mischievous gray eyes and a quick wit, she could be sharp-tongued with a sycophant and stern with an errant grandchild." She was a live-in housekeeper for a total of 15 years, starting at age 12. An employer noticed her appreciation for their prints made by Currier and Ives, and they supplied her with drawing materials. Moses and her husband began their married life in Virginia, where they worked on farms. In 1905, they returned to the Northeastern United States and settled in Eagle Bridge, New York. They had ten children, five of whom survived infancy. She embroidered pictures with yarn, until disabled by arthritis. The Life Magazine has been autographed on the front cover by Grandma Moses....................BOTH LIFE MAGAZINE AND AUTOGRAPH ARE IN VERY GOOD CONDITION. 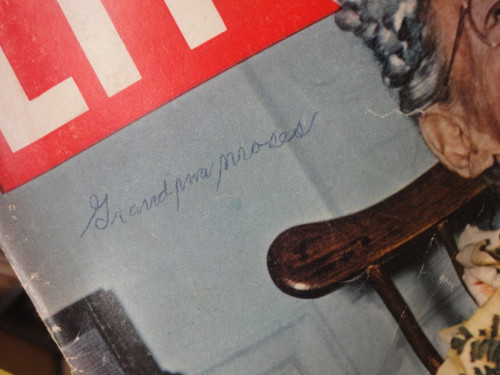