THIS IS AN AUTHENTICALLY AUTOGRAPHED PHOTO BY ROBERT GOULET.. THIS IS A 8 INCH BY 8 INCH COLOR LITHOGRAPH SIGNED BY ROBERT GOULET MOUNTED ON PHOTOGRAPHY PAPER. CONDITION OF THE PHOTO AND AUTOGRAPH IS VERY GOOD. Robert Gerard Goulet (November 26, 1933  October 30, 2007) was a Canadian-American Grammy- and Tony Award- winning entertainer. He rose to international stardom in 1960 as Lancelot in Lerner and Loewe's hit Broadway musical Camelot. His long career as a singer and actor encompassed theatre, radio, television and film. Enjoying most of his career in the United States, he later took permanent residence there (Goulet was an American citizen, having been born in Massachusetts and raised in the United States until the age of 13). He did seek Canadian citizenship later in life, owing to his parentage. 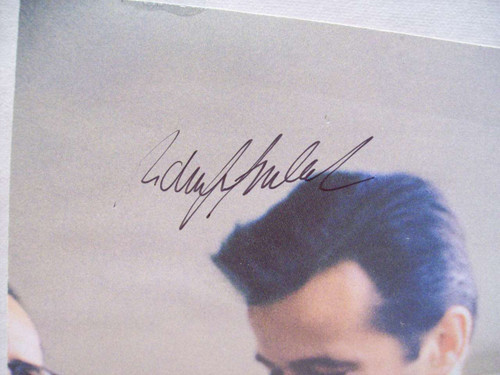