"Screen Romances" Magazine-April 1944-110 pages. This vintage movie magazine-which originally sold for fifteen cents-features a color cover photo of actress Paulette Goddard.The magazine also features a four page article with photos of Paulette Goddard.Paulette Goddard was a Hollywood leading lady from her breakthrough in 1936 -- opposite then-husband Charlie Chaplin in Modern Times -- until her retirement in 1958 as the wife of writer Erich Maria Remarque. Early information about her life is sketchy: Her birth name may have been Marion Pauline Levee, Pauline Marion Goddard Levee, or Levy, and recent scholarship indicates she was born in 1910, though sources range from 1904 to 1914. She was a Ziegfeld Girl and was married for a few years before landing in Hollywood in 1931. She met silent film superstar Chaplin in 1932 and they became a pair and eventually married. She went from bit parts to stardom after her marvelous performance in Modern Times. Goddard and Chaplin split in 1942, and she married actor Burgess Meredith in 1944. (They divorced in 1949.) Goddard was a glamorous and versatile leading lady for Paramount Pictures; her films included The Women (1939, with Joan Crawford), The Great Dictator (1940, with Chaplin), So Proudly We Hail (1943, and her only Oscar nomination), Kitty (1945) and The Diary of a Chambermaid (1946, with then-husband Meredith). She made several B movies in the 1950s, then married Remarque and retired to Europe.The magazine has been autographed on the front cover by Paulette Goddard with a fountain pen in black......BOTH MAGAZINE AND AUTOGRAPH ARE IN AVERAGE CONDITION....... 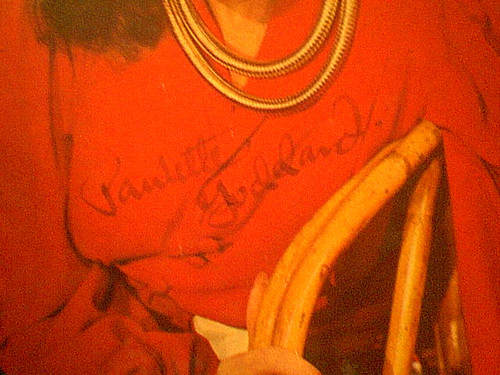