Life Magazine-December 17,1945-136 pages. This vintage LIfe Magazine-which originally sold for ten cents-features a full cover photo of actress Paulette Goddard. The magazine also features a 5 page article with photos on The Movie Of The Week-"Kitty" starring Paulette Goddard and an additional biography of Miss Goddard with photos.Goddard's career went into full gear when she met Charlie Chaplin, who was looking for an unknown actress to play "The Gamin" in his 1936 film Modern Times. Struck by the actress's breathtaking beauty and natural comic sense, Chaplin not only cast her in the film, but fell in love with her. It is still a matter of contention in some circles as to whether or not Chaplin and Goddard were ever legally married (Chaplin claimed they were; it was his third marriage and her second), but whatever the case, the two lived together throughout the 1930s. Goddard's expert performances in such films as The Young in Heart (1938) and The Cat and the Canary (1939) enabled her to ascend to stardom without Chaplin's sponsorship, but the role she truly craved was that of Scarlett O'Hara in the 1939 epic Gone With the Wind. Existing test footage indicates that she would have made an excellent Scarlett, but the tide of public opinion was against her; since no one knew the state of her marital status with Chaplin, she was deemed a "moral risk," one whose casting as Scarlett would not sit well in America's Bible-belt states. After working together in The Great Dictator (1940), Goddard and Chaplin's relationship crumbled; by the mid-1940s she was married to another extremely gifted performer, Burgess Meredith. The actress remained a box-office draw for her home studio Paramount until 1949, when (presumably as a result of a recent flop titled Bride of Vengeance) she received a phone call at home telling her bluntly that her contract was dissolved. Goddard's film appearances in the 1950s were in such demeaning "B" pictures as Vice Squad (1953) and Babes in Baghdad (1953). Still quite beautiful, and possessed of a keener intellect than most movie actors, she retreated to Europe with her fourth (or third?) husband, German novelist Erich Maria Remarque (All Quiet on the Western Front). This union was successful, lasting until Remarque's death. Coaxed out of retirement for one made-for-TV movie in 1972 (The Snoop Sisters), Goddard preferred to remain in her lavish Switzerland home for the last two decades of her life. The Life Magazine has been autographed on the front cover by Paulette Goddard with a fountain pen in black............BOTH MAGAZINE AND AUTOGRAPH ARE IN VERY GOOD CONDITION.............. 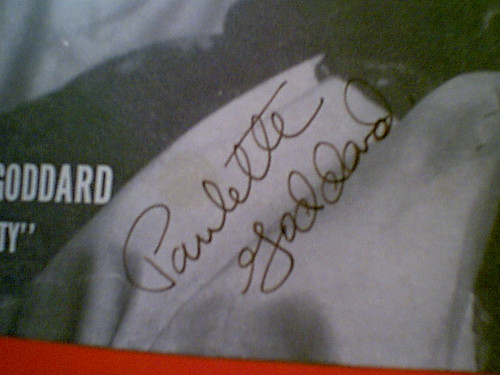