Playbill for the Morosco Theatre-1981-"The Moony Shapiro Songbook"-starring Jeff Goldblum-6" X 9"-32 pages-theatre program.Songbook (New York title The Moony Shapiro Songbook) is a musical with music by Monty Norman and book by Monty Norman and Julian More. It premiered at the Globe Theatre, in London on July 25, 1979, and ran for 208 performances.It won the Olivier Award for the Best New Musical in 1979.It opened on Broadway at the Morosco Theatre on May 3, 1981 and closed after the 1 performance and 15 previews. Directed by Jonathan Lynn with musical staging by George Faison, the musical featured Gary Beach, Jeff Goldblum, Judy Kaye and Timothy Jerome as "Mooney Shapiro". All of the cast members played several characters, one of which was their real-life name. The musical received a Tony Award nomination for Best Book of a Musical.The Playbill has been autographed on the front cover by Jeff Goldblum...............BOTH PLAYBILL AND AUTOGRAPH ARE IN VERY GOOD CONDITION................ 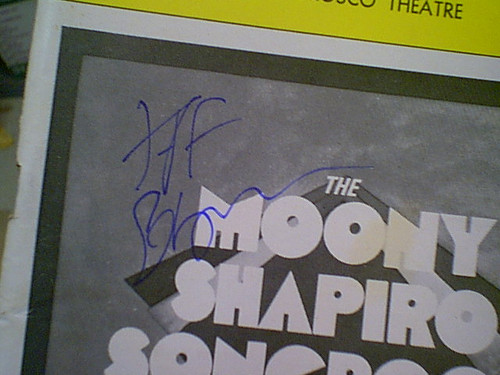