"No Love No Nothin"-1943-Triangle Music-sheet music. This song is featured in the 1943 Movie-"The Gang's All Here" starring Benny Goodman,Carmen Miranda and Alice Faye.Sgt. Andy Mason Jr. (James Ellison) is on the eve of shipping out from New York with his unit -- he's the son of Andrew Mason Sr. (Eugene Pallette), a wealthy, blustery Wall Street financier. While paying respects to his father and the latter's business partner, dithering fuss-budget Peyton Potter (Edward Everett Horton), at the Club New Yorker, he spots chorus girl Eadie Allen (Alice Faye) and turns on the charm and all of the allure that the ne'er-do-well son of a Wall Street millionaire can muster. That, however, doesn't impress Eadie, who ignores his invitation so she can do her patriotic bit helping servicemen at the Stage Door Canteen (or, as it's called here, the "Broadway Canteen"). Realizing how down to earth and genuine she is -- exactly the kind of girl who doesn't care about his money or social position -- Andy shows a bit of the boyish innocence he has hidden beneath the arrogance that comes from his background of wealth and privilege, and also some humility, hiding that background and his real name. Before the night and their "date" on the Staten Island Ferry are over, they're genuinely in love with each other, but that presents a problem -- since age 12, Andy has been unofficially "engaged" to Potter's daughter Vivian (Sheila Ryan), who expects to marry him, and he can't quite bring himself to hurt Vivian by telling her that he's met someone else. Flash forward a few months, and Andy is on his way home on leave, a hero in the Pacific, and his father is so proud that he has to do something special to honor him, trying to rent out the Club New Yorker for a party but discovering that it's closed for rehearsals of a new production. Suddenly, his fatherly devotion, patriotism, and Wall Street experience all click together -- he brings the entire performing company, plus Benny Goodman's band, up to his and Potter's adjoining estates in Westchester to stage their act for his upscale neighbors and friends as part of the biggest War Bond rally ever seen (minimum admission a new 5,000-dollar War Bond), and in the process giving his son the biggest party he's ever seen. This leads to more comic turns for Horton's Potter, as a man who would make coffee nervous -- especially around show people -- but delights his ex-dancer wife (Charlotte Greenwood). That's also how Eadie and Vivian end up at the Potter mansion together, comparing notes on their remarkably similar respective fiancés. When the show's star, Dorita (Carmen Miranda), lets the cat out of the bag, it looks like Andy may lose Eadie, who can't bear to lose Andy but also won't even try to take him away from Vivian, who loves him too, but has loved him a lot longer. But while they sort out their romance, the show must go on, and go on it does.The sheet music has been autographed on the front by Benny Goodman,Carmen Miranda and Alice Faye with fountain pens in blue..............BOTH SHEET MUSIC AND AUTOGRAPHS ARE IN VERY GOOD CONDITION........................ 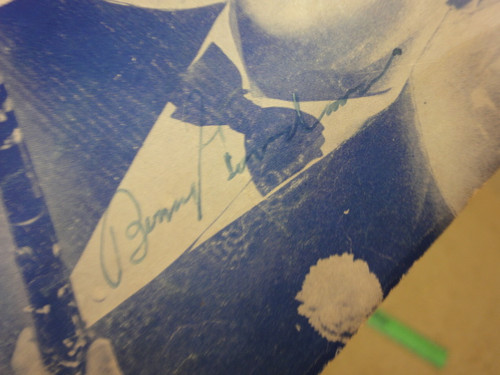