Time Magazine-July 24,1964-92 pages. This vintage Time Magazine-which originally sold for thirty five cents-features a color cover photo of Barry Goldwater. The magazine also features a 5 page article with photos of Berry Goldwater accepting the Presidential Nomination.Barry Goldwater returned from the Army Air Force after World War II with the rank of Lt. Colonel. After a brief hitch with the family store, Goldwater entered politics and by 1952 had been elected U.S. Senator from Arizona. In 1964 Goldwater ran for the presidency, urging less government, a strong military and the end of federal welfare programs. He lost to Lyndon Johnson, becoming an ideological hero for the Republicans in the process. He was returned to the Senate for three more terms, retiring in 1986. The Time Magazine has been autographed on the front cover by Barry Goldwater................BOTH MAGAZINE AND AUTOGRAPH ARE IN VERY GOOD CONDITION.................. 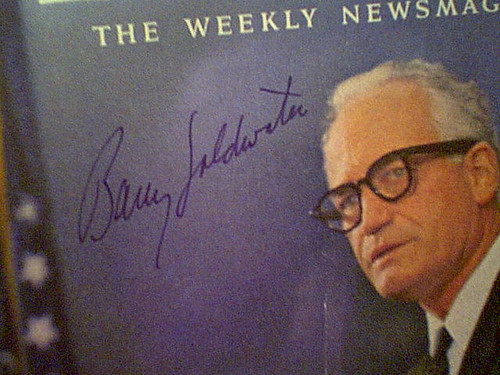