This item is an 8" X 11",black and white lithograph photo of actor Danny Glover.Danny Lebern Glover (born July 22, 1946) is an American actor, film director, and political activist. Glover is perhaps best known for his roles as Detective Roger Murtaugh in the Lethal Weapon film franchise.Glover has had a variety of film, stage, and television roles, and is best known for playing Los Angeles police Sergeant Roger Murtaugh in the Lethal Weapon series of action films. During his career, he has made many cameo appearances. For example, he appeared in the Michael Jackson video Liberian Girl of 1987. He has also appeared as the husband to Whoopi Goldberg's character Celie in The Color Purple, and as Lieutenant James McFee in the film Witness. In 1994 he made his directorial debut with the Showtime channel short film Override. Also in 1994, Glover and actor Ben Guillory formed the Robey Theatre Company in Los Angeles, focusing on theatre by and about Black people.The lithograph photo has been autographed on the front by Danny Glover.............BOTH PHOTO AND AUTOGRAPH ARE IN VERY GOOD CONDITION. 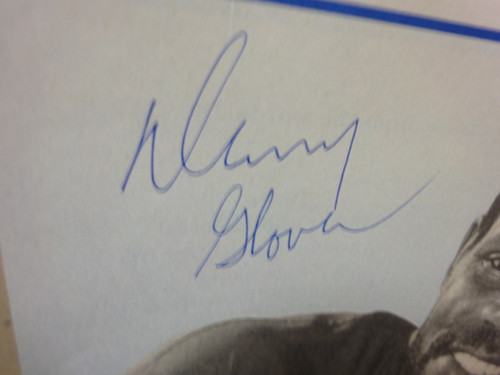