Provenance is a fancy word that refers to an object's history, or who owned the object, when and where. Provenance is to an autograph what a deed trail is to a piece of land. The provenance of autographs often carries with it great importance. Documented evidence of provenance for an autograph can help to establish that it has not been altered and is not a forgery or a reproduction. The quality of provenance of an autograph can make a considerable difference to its selling price in the market; this is affected by the degree of certainty of the provenance, and the status of past owners as collectors. People want to know if something was autographed and touched by a great man or woman. People want some of the gilt from the past to rub off on them. That's why it matters so much. Provenance that leads back to not only the great names of the past but also to great collectors also has value.Over two-thirds of our items come from three major collectors. STEVE GIBSON Steve Gibson sang, played various combo string instruments, and was a main force behind the Red Caps, a top R&B combo for decades. Mr. Gibson (1914-1995),who was married to Damita Jo ,began collecting in 1933 when he obtained the autograph of Cab Calloway . From there, he built a collection of more than 8,000 autographs .....Since it is impossible for me to obtain a Certificate of Authenticity from Mr.Gibson,I am displaying documents from his estate. I took the photos to add to the credibility of our items..This page features the birth certificate of Steve Gibson and Damita Jo's daughter --Stephanie La Trelle Gibson--who was delivered by Dr. Tatsuhiko Miyamoto on April 12,1955 at University Hospital in Los Angeles. 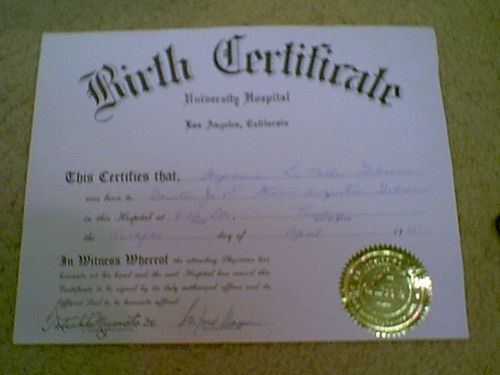