"My Song"-1931-DeSylva Brown-sheet music. This song is featured in the 1931 George White Eleventh Edition of "Scandals".One of the few theatrical impresarios to truly rival the great Florenz Ziegeld, former Burlesque "hoofer" George White (born George Weitz in either New York or Toronto) became a mega-millionaire with his annual Broadway revue George Whites Scandals, which was seen from the late teens until 1939. Among the stars either discovered or showcased in the various editions of the "Scandals" were Rudy Vallee, Alice Faye, Ann Miller and Eleanor Powell. Alas, at the time of his death in 1968 at age 79, White was living in abject poverty, pathetically dreaming of a comeback in a showbiz world that had long since passed him by. Back in the 1930s, however, he was at his professional zenith, confidently transferring his girl-filled extravaganzas to the movie screen, beginning with Follow the Leader, the 1930 film version of his "book" musical Manhattan Mary. Although the character of George White was played by Bobby Watson in that particular film, White appeared as "himself" in Foxs two George Whites Scandals films, which he produced and codirected in 1934 and 1935. And when RKO filmed its own cinematic version of Scandals ten years later, George White was impersonated on screen by actor/director Glenn Tryon (considerably taller and better-looking than the diminutive Bobby Watsonor, for that matter, White himself).The sheet music has been autographed on the front by George White with a fountain pen in black..........BOTH SHEET MUSIC AND AUTOGRAPH ARE IN VERY GOOD CONDITION.................. 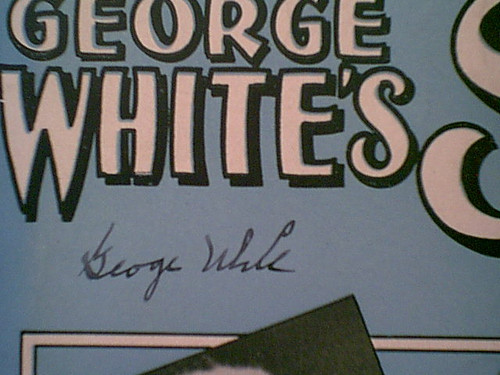