This item is an 8" X 10",black and white photo of Richard Gere.Cool and handsome, yet mysteriously remote, Richard Gere has been an American movie star since the 1970s. He got early attention for his roles in Looking for Mr. Goodbar (1977) and Days of Heaven (1978), but it was his title role as a high-class male prostitute in American Gigolo (1980, directed by Paul Schrader) that made him a star. Gere followed up with a more mainstream hit, playing a rogue naval officer-in-training in An Officer and a Gentleman (1982, with Debra Winger). His career cooled for a few years, but in 1990 he bounced back by co-starring with Julia Roberts in the surprise 1990 hit Pretty Woman. (He rejoined Roberts for another romantic comedy, Runaway Bride, in 1999.) Now silver-haired and a little warmer onscreen, he has stayed busy as a leading man in movies including Unfaithful (2002, with Diane Lane), the Oscar-winner Chicago (2002, with Renee Zellweger), Shall We Dance? (2004, with Jennifer Lopez) and Bee Season (2005). He played the phony Howard Hughes biographer Clifford Irving in the 2007 film The Hoax. Gere, a Buddhist, is known as an off-screen champion for Tibetan independence and is a pal of the Dalai Lama.The photo has been autographed on the front by Richard Gere...........BOTH PHOTO AND AUTOGRAPH ARE IN VERY GOOD CONDITION. 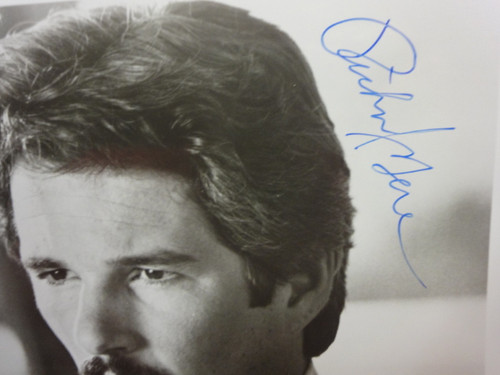