Francis A. March-"History Of The World War"-1919-John C. Watson-6" X 9"-798 pages-Introduction By General Peyton C. March-Hardcover Book-With Photos-With Illustrations-Signed BY Peyton C. March.Peyton Conway March (born December 27, 1864 in Easton, Pennsylvania - April 13, 1955) was an American soldier and Army Chief of Staff. March was the son of Francis Andrew March, considered the principal founder of modern comparative linguistics in Anglo-Saxon and one of the first professors to advocate and teach English in colleges and universities. Peyton March attended Lafayette College, where his father occupied the first chair of English language and comparative philology in the United States. In 1884, he was appointed to West Point and graduated in 1888. He was assigned to the 3rd Artillery.In 1894, March was assigned to the 5th Artillery and promoted to 1st lieutenant. He was sent to the Artillery School in 1896. He organized the Astor Battery and was sent to the Philippines in the Spanish-American War. In 1899, March was the aide to Gen. Arthur MacArthur, Jr.. Later that year he was promoted to major. He continued to serve in the Philippines, and was a provincial governor and commissary of prisoners.In 1904-1905, March was one of several American military attachés serving with the Japanese army in the Russo-Japanese War. He would become one of eight observers who were later promoted to the rank of General in the U.S. Army.In 1907, March commanded the 1st Artillery Battalion, 6th Field Artillery. March then served as adjutant of Fort Riley, then served as adjutant at several other commands, including at the War Department. In 1916, he was promoted to colonel and commanded the 8th Field Artillery on the Mexican border.During World War I, March was promoted to brigadier general and commanded the 1st Field Artillery Brigade, 1st Infantry Division, American Expeditionary Forces. Later that year, he was promoted to major general and commanded the artillery units of the U.S. First Army and all non-divisional artillery units. The book has been autographed on the title page with a fountain pen in black..........BOTH BOOK AND AUTOGRAPH ARE IN AVERAGE CONDITION................... 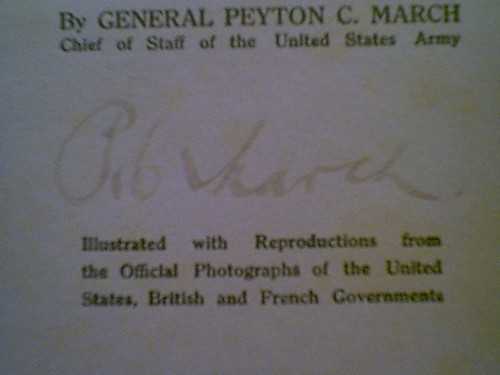