This item is an 8" X 10" cover from a vintage Time Magazine. PLEASE NOTE-THIS IS THE COVER ONLY-THERE IS NO COMPLETE MAGAZINE. The Time Magazine is dated October 30,1944-Volume XLIV and features "Douglas MacArthur-I Shall Return" in color.Douglas MacArthur was one of the best-known American military leaders of World War II, when he commanded Allied forces in the southwest Pacific. MacArthur graduated first in his class from West Point Academy in 1903, then went to the Philippines and worked as an aide to his father, General Arthur MacArthur, Jr. He served with distinction in World War I, then returned to the Philippines as major general (1922-25) and commander of the Department of the Philippines (1928-30) before a mainland posting as Army chief of staff (1930-35). In 1935 he was again sent to the Philippines to organize defenses in preparation for their independence. In 1937 he retired from the Army rather than leave his Philippine project uncompleted, but he was recalled to active duty when it became clear that war with Japan was imminent. Overrun by Japanese forces at Bataan, MacArthur was ordered by President Franklin Roosevelt to withdraw to Australia. Before MacArthur and his family escaped, he made the famous vow, "I shall return." In 1942 he was made the supreme commander of Allied forces in the southwest Pacific and by 1945 had liberated the Philippines on the way to a planned invasion of Japan. MacArthur accepted the Japanese surrender in Tokyo Bay on 2 September 1945, then led the occupation forces in the reconstruction of Japan. After North Korea invaded South Korea in 1950, MacArthur was put in charge of United Nations forces and successfully drove the invaders back. His enthusiasm for pushing on and attacking areas of China was not shared by President Harry Truman, who relieved MacArthur of his command in 1951. Still considered a national hero, MacArthur gave a famous address to Congress and retired. Flamboyant and confident, MacArthur has also been called arrogant and egotistical, but his amphibious campaigns in World War II and in Korea are considered brilliant examples of military strategy. A hand signed cut signature by Douglas MacArthur with a fountain pen in black has been affixed to the front. The cut signature portion is approximately 1 1/2" X 3 1/2"...................BOTH MAGAZINE AND AUTOGRAPH ARE IN VERY GOOD CONDITION. 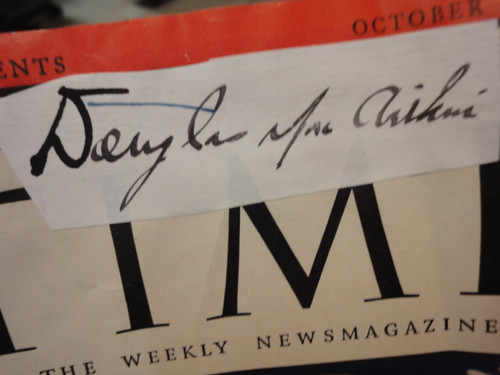