This item is an 8" X 10",black and white photo of actor Vincent Gardenia in a scene from the 1974 Movie-"Death Wish". The photo has an original,dated byline on Paramount Pictures Stationery explaining the photo.This drama about a man who takes the law into his own hands was wildly controversial upon first release, sparking much debate about the perceived pro-vigilante stance of the story, and established Charles Bronson as a major box office draw in the United States. Paul Kersey (Charles Bronson) is a liberal architect living in New York City. One day, a group of drug-crazed thugs break into his apartment while he's gone, killing his wife Joanna (Hope Lange) and brutally raping his married daughter, leaving her comatose. When the police are unable to find the culprits, Kersey arms himself and begins patrolling the streets, killing muggers and thieves as he encounters them. While his obsessive search for street justice sickens him at first, in time Kersey begins to enjoy it and becomes a hunted man himself, as Police Detective Frank Ochoa (Vincent Gardenia) tries to find the man who is doing the police's job for them, and a bit too well. Jeff Goldblum made his screen debut as one of the lunatics who attacks Joanna.The photo has been autographed on the front by Vincent Gardenia......CONDITION OF PHOTO,BYLINE AND AUTOGRAPH IS EXCELLENT............... 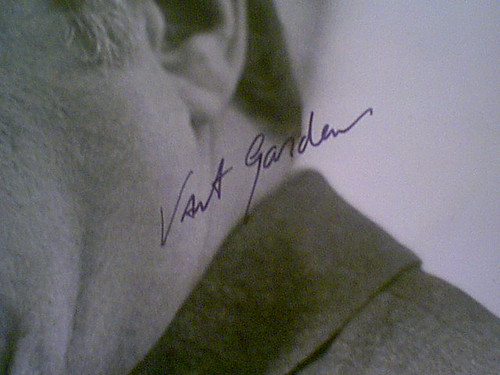