This item is an 8" X 10", black and white photo of actress Greer Garson. Oscar-winning actress known for portraying strong women, Garson made her screen debut in Louis B. Mayer's Good-bye Mr. Chips (1939) opposite Robert Donat. Nominated seven times for her performances, she won an Oscar for her role in Mrs. Miniver (1942). Her other films include Pride and Pejudice (1940), Blossoms in the Dust (1941), Random Harvest (1942), Madame Curie (1943), and Mrs. Parkington (1944), often working with Walter Pidgeon. She moved on to Broadway, replacing Rosalind Russell in Auntie Mame (1958), then went back to films in Sunrise at Campobello (1960) as Eleanor Roosevelt . In her later years, she made several television appearances, produced a few plays, and engaged in philanthropic endeavors with her wealthy husband, oil magnate Buddy Fogelson. The photo has been autographed by Greer Garson....................BOTH PHOTO AND AUTOGRAPH ARE IN EXCELLENT CONDITION. 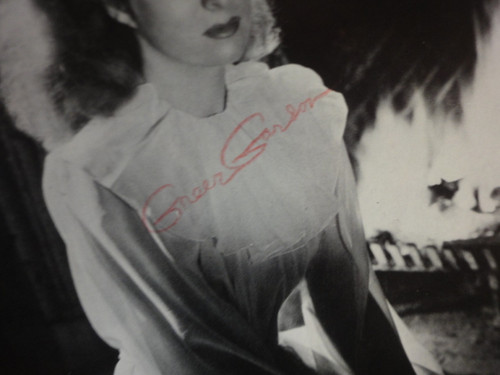