Garland, Judy "There Is No Breeze To Cool The Flame Of Love" 1946 Sheet Music Signed Autograph

Judy Garland-"There Is No Breeze To Cool The Flame Of Love"-1946-Robbins Music- Sheet Music.... Judy Garland (born Frances Ethel Gumm; June 10, 1922 – June 22, 1969) was an American actress, singer, vaudevillian, and dancer. With a career spanning 45 years, she attained international stardom as an actress in both musical and dramatic roles, as a recording artist, and on the concert stage. Renowned for her versatility, she received an Academy Juvenile Award, a Golden Globe Award, and a Special Tony Award. Garland was the first woman to win the Grammy Award for Album of the Year, which she won for her 1961 live recording titled Judy at Carnegie Hall. The sheet music has been autographed on the front cover by Judy Garland with a fountain pen in red....................BOTH SHEET MUSIC AND AUTOGRAPH ARE IN VERY GOOD CONDITION. 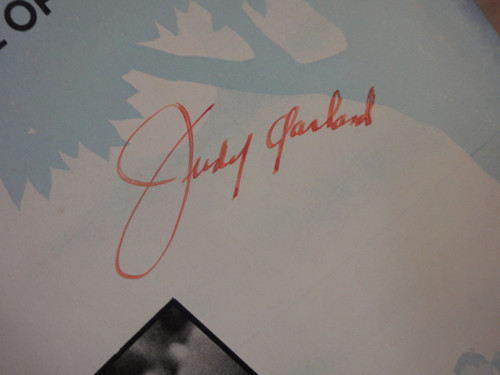 Garland, Judy "There Is No Breeze To Cool The Flame Of Love" 1946 Sheet Music Signed Autograph