This item is a 3 1/2" X 5 1/2", color fan club postcard photo of Jim Garner as he appeared in the popular "Maverick" television series. The other side of the postcard photo has an original postmark and date-July 7,1959-Burbank California and a handwritten recipient address. The postmark also features a special advertisement for "The Nun's Story". The son of an Oklahoma carpet layer, James Garner did stints in the Army and merchant marines before working as a model. His professional acting career began with a non-speaking part in the Broadway play The Caine Mutiny Court Martial (1954), in which he was also assigned to run lines with stars Lloyd Nolan, Henry Fonda, and John Hodiak. Given that talent roster, and the fact that the director was Charles Laughton, Garner managed to earn his salary and receive a crash course in acting at the same time. After a few television commercials, he was signed as a contract player by Warner Bros. in 1956. He barely had a part in his first film, The Girl He Left Behind (1956), though he was given special attention by director David Butler, who felt Garner had far more potential than the film's nominal star, Tab Hunter. Due in part to Butler's enthusiasm, Garner was cast in the Warner Bros. TV Western Maverick. The scriptwriters latched on to his gift for understated humor, and, before long, the show had as many laughs as shoot-outs. Garner was promoted to starring film roles during his Maverick run, but, by the third season, he chafed at his low salary and insisted on better treatment. The studio refused, so he walked out. Lawsuits and recriminations were exchanged, but the end result was that Garner was a free agent as of 1960. He did quite well as a freelance actor for several years, turning in commendable work in such films as Boys' Night Out (1962) and The Great Escape (1963), but was soon perceived by filmmakers as something of a less-expensive Rock Hudson, never more so than when he played Hudson-type parts opposite Doris Day in Move Over, Darling and The Thrill of It All! (both 1963). Garner fared rather better in variations of his Maverick persona in such Westerns as Support Your Local Sheriff (1969) and The Skin Game (1971), but he eventually tired of eating warmed-over stew; besides, being a cowboy star had made him a walking mass of injuries and broken bones. He tried to play a more peaceable Westerner in the TV series Nichols (1971), but when audiences failed to respond, his character was killed off and replaced by his more athletic twin brother (also Garner). The actor finally shed the Maverick cloak with his long-running TV series The Rockford Files (1974-1978), in which he played a John MacDonald-esque private eye who never seemed to meet anyone capable of telling the truth. Rockford resulted in even more injuries for the increasingly battered actor, and soon he was showing up on TV talk shows telling the world about the many physical activities which he could no longer perform. Rockford ended in a spirit of recrimination, when Garner, expecting a percentage of the profits, learned that "creative bookkeeping" had resulted in the series posting none. To the public, Garner was the rough-hewn but basically affable fellow they'd seen in his fictional roles and as Mariette Hartley's partner (not husband) in a series of Polaroid commercials. However, his later film and TV-movie roles had a dark edge to them, notably his likable but mercurial pharmacist in Murphy's Romance (1985), for which he received an Oscar nomination, and his multifaceted co-starring stints with James Woods in the TV movies Promise (1986) and My Name Is Bill W. (1989). In 1994, Garner came full circle in the profitable feature film Maverick (1994), in which the title role was played by Mel Gibson. With the exception of such lower-key efforts as the noir-ish Twilight (1998) and the made-for-TV thriller Dead Silence (1997), Garner's career in the '90s found the veteran actor once again tapping into his latent ability to provoke laughs in such efforts as Space Cowboys (2000) while maintaining a successful small-screen career by returning to the role of Jim Rockford in several made-for-TV movies. Providing a voice for the popular animated feature Atlantis: The Lost Empire (2001), as well as appearing in the comedy-drama The Divine Secrets of the Ya-Ya Sisterhood (2002), ensured that, despite his age, Garner would continue to seek out film roles and maintain a place in the public eye. The postcard photo has been autographed on the front by Jim Garner in black.....BOTH POSTCARD PHOTO AND AUTOGRAPH ARE IN EXCELLENT CONDITION................. 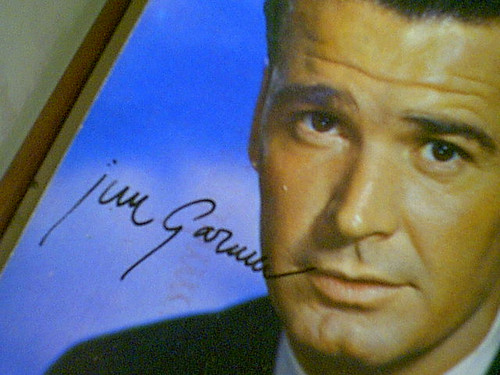